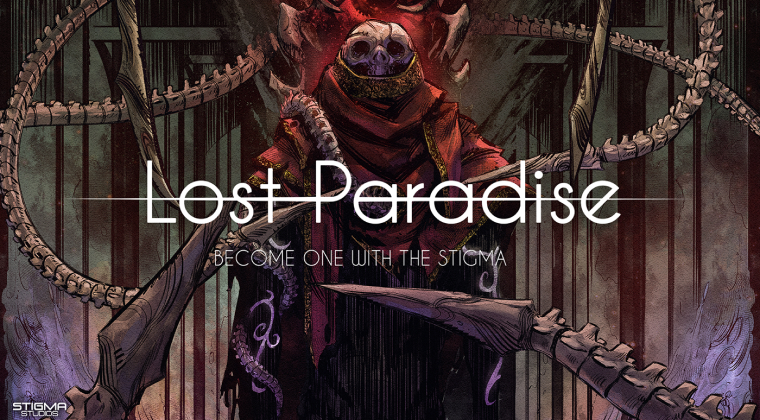 For our first showcase we had the chance of talking with Antonino Truisi, founder of Stigma Studios. Antonino was kind enought to give us a peek behind the scenes on their upcoming game title "Lost Paradise" and share with us how Arcweave can be a valuable tool for him and his team.

Could you tell us a little bit about yourself and Stigma Studios?

Stigma Studios is actually a pure indie team, the philosophy behind Stigma Studios is to create videogames that offer something more to the player. We invest a lot of time and effort in research and the artistic side of every single game we create, always trying to come up with inspiring and unique approaches to gameplay. The team is totally independent of any publisher or external funding and is currently working on Lost Paradise, a third-person action game developed with Unreal Engine 4.

Lost Paradise It is our first major project!

For those unfamiliar with Lost Paradise can you tell us a few things about the game? What was the motivation behind it?

AT: Lost Paradise is a third person action game currently in development using Unreal Engine 4. Our aim is to tell a unique story in a way that is deeply bound to the gameplay, almost in a symbiotic relationship.

The player, guided by a parasitic entity called Stigma, will face dreadful bosses and enemies in order to get deeper knowledge. The more he’ll know, the stronger he’ll grow, gaining access to more weapons and abilities.

The reason under the development of Lost Paradise is the need to approach unique and piercing communication with the player.

Lost Paradise seems to focus a lot on melee and ranged action. Can you tell us what is unique about it?

AT: Exactly, basically the fights in Lost Paradise will be melee fights, we chose to remove the experimental feature of ranged attacks. The player will be able to counter every enemy with just melee combat.

One of the peculiarities of Lost Paradise is that the feeling of progression is tied with both gameplay and storytelling. The player will master many weapon styles while relying on special types of equipment or changing his stats by equipping armors.

How did you design a game like Lost Paradise? Did you conceive the whole game at once or was it more of an iterative way of designing?

AT: Development and personal improvement of each member have always been growing together since the beginning of every member’s involvement with the project.

We’ve always been focusing on specific milestones but since this the first working experience we 've had on such a complex game testing, experimentation and failings have always been part of the game. Actually these experiences have turned out to be very useful to shape and polish the general concept as well as our skills.

Trying to give a clearer reply, the development of Lost Paradise has been from the beginning modular and progressive. Now we’re in the point where many aspects are designed and others are still experimental, but we have a firm grasp on what we want the game to be and represent. 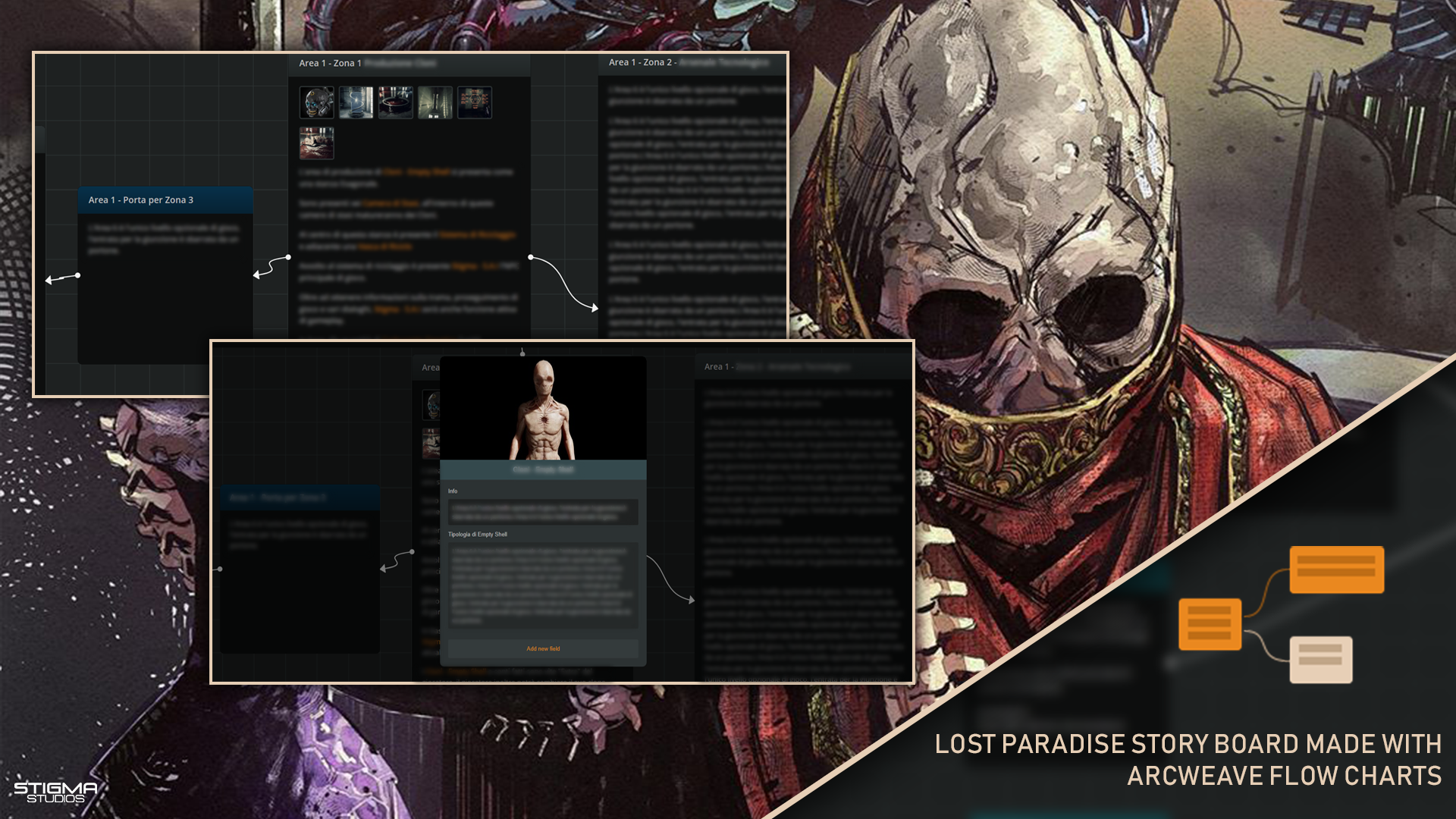 You are using Unreal Engine 4 as the development engine for Lost Paradise. Can you tell us a few things on why you went with it over other software?

AT: Honestly, when we started to work on Lost Paradise as a team, we chose to work with Unreal Engine 4 mainly for the look that other games had reached by using this engine.

After a few months, we understood that the UE wasn’t only that but an outstandingly powerful engine in every step of the development. Time passed and after frequent updates by Epic, Unreal Engine met every expectation. Epic’s support has been awesome, not just over their products, but towards the developers too.

So I’d say that we chose Unreal Engine not just for its intrinsic power but for the outstanding and always carefully supported environment built by Epic Games.

How has Arcweave helped as a production tool for Lost Paradise? What do you think are its biggest benefits during design/development

AT: Arcweave helped a lot!

As mentioned previously, Lost Paradise has come as a result of an evolutionary project. With Arcweave we had the chance and the perfect tool to examine and "unroll" many concepts in their almost final shape, not to mention it being the right tool to visualize our development workflow in the most intuitive and complete way.

We have not exploited it 100%, but for now, one of the greatest benefits is to legitimately have a visual GDD at hand, easy to consult, and this granted a more stable general production.

Since it is really versatile even our sound designers and composers will use it to plan the whole musical ecosystem of the game. We also plan to use it for every other work in the future, for sure! 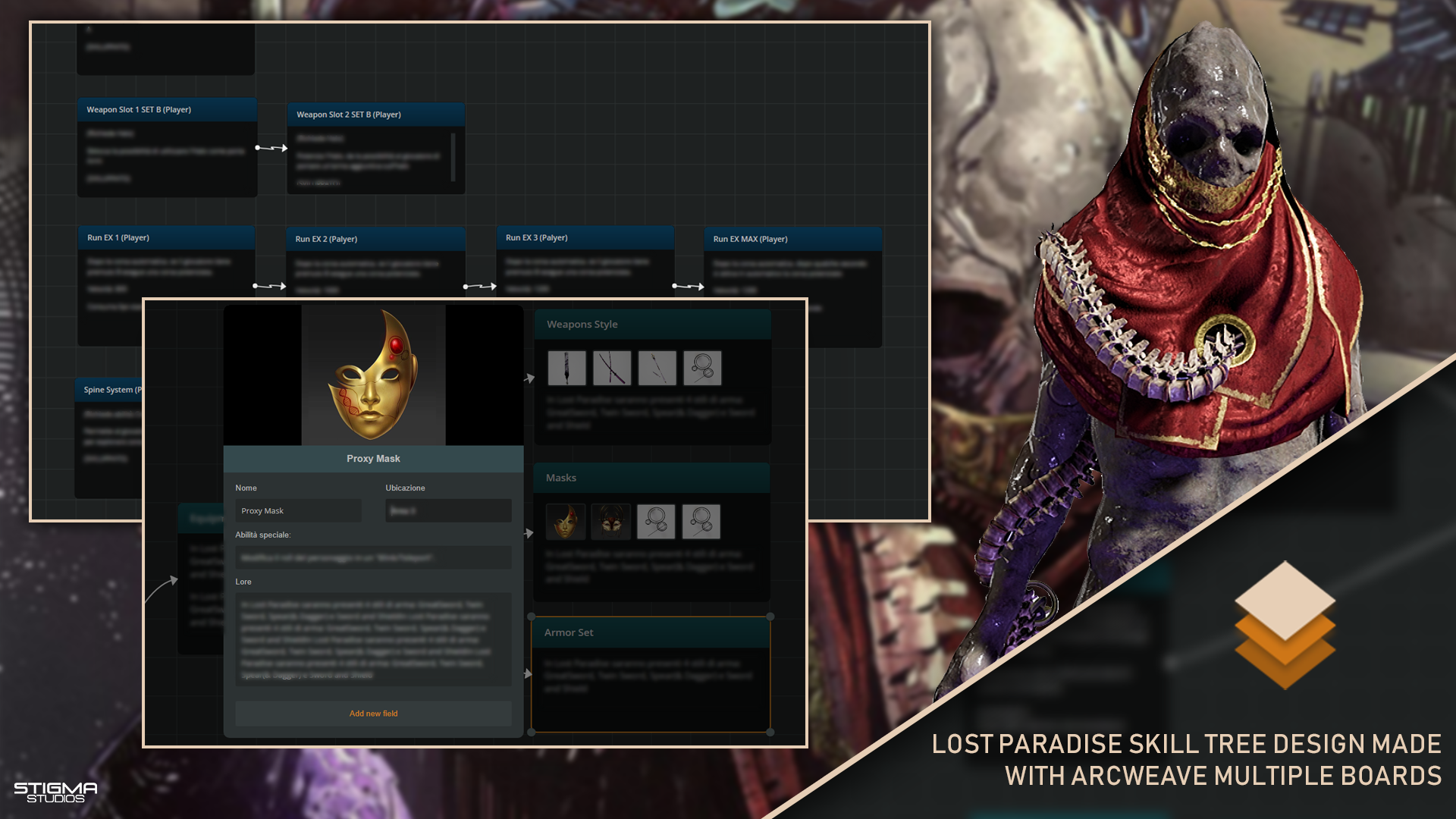 What was the most difficult task during Lost Paradise development so far? What other milestones do you expect to encounter during the rest of the development?

AT: Undoubtedly the toughest design task during development has been finding the perfect balance between gameplay and storytelling. Lost Paradise sure is an action game, but its main purpose is to tell a story where the player is the real protagonist. Having to tie the gameplay with the main plot in the most coherent and unique way possible has been challenging.

We have several milestones still to be reached, this year is going to be spent primarily by finalising many elements of the game.

AT: Take your time, experiment, learn from your mistakes and play videogames. Favor the study of games from similar genres, and let yourself be inspired by them.

Dig for unconventional ways of expressing your vision but never forget the final users and never underestimate any feedback from anyone, may it be a player or a dev.

Don’t let yourself lose your heart, nothing is impossible.

AT: I’d like to say thank you to the Arcweave team by us all and that we greatly recommend it to every dev. Regardless of project size, Arcweave makes everything more stable. Support this awesome project.

And don’t forget… Become One With The Stigma

Thanks to Antonino Truisi for taking the time to answer all of our questions and for his kind words. Make sure to visit the Stigma Studios website and social media channels on Facebook and Twitter